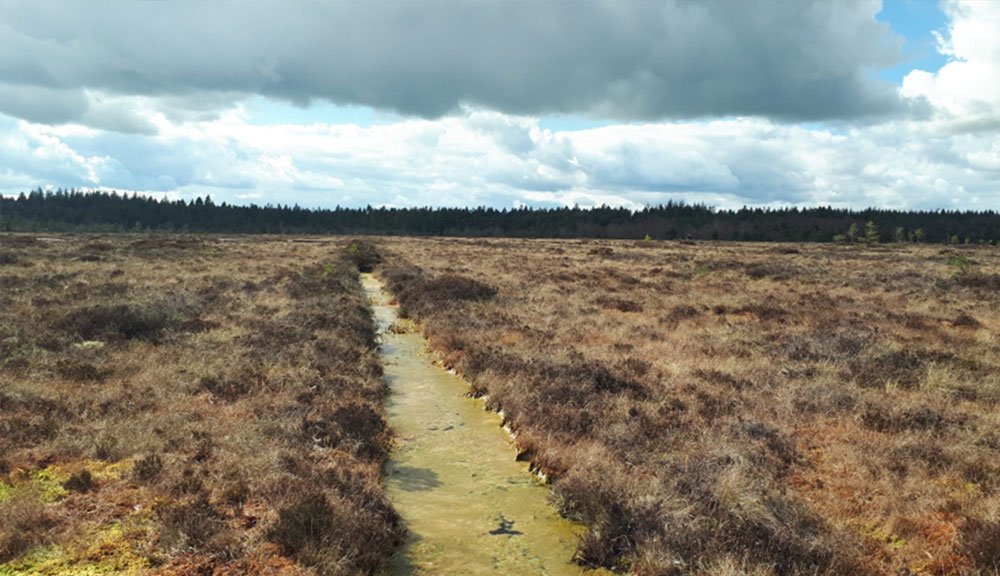 Source: Photo taken by the author on a trip to Abbeyleix Bog (Ireland, April 2022)

What do you do when culture conflicts with nature protection? Should traditional practices be banned in light of their harmful impact on the environment? Or should they still be valued as an expression of cultural heritage and weighed against the need to protect nature?

These are the questions I am confronted with in my research, which studies the case of peatland uses in Ireland. Overall, my doctoral research project brings together the need to examine the current response to climate change, the protection of ecosystems as carbon sinks, and the respect for human rights. The case of peatlands and their use in Ireland proved to be an excellent example of the conflation of these issues. In particular, what dominates the case study is the clash between what is considered a traditional practice and the protection of peatlands as a natural habitat.

On the one hand, peat or turf cutting in Ireland is considered a traditional activity carried out, most often, on privately owned bogs in order to ensure the supply of domestic fuel and it is passed down from generation to generation. On the other hand, obligations stemming from the EU and related to ecosystem protection considerations have led to the banning of these activities on selected bogs. These considerations are even more felt today in light of the growing awareness of the potential of peatlands to mitigate climate change. In this blogpost, I will tease out the issues surrounding the use of peatlands for fuel in Ireland by looking at the two different sides of the story.

Turf cutting as a traditional practice

The peatland scientist Florence Renou-Wilson describes Irish peatlands as ‘deeply humanised landscapes’ in that they have evolved ‘in close association with land use systems’. In Ireland, peatlands have been affected by human exploitation through various land use activities, including the extraction of peat.

Other than for the purpose of electricity production on an industrial scale, peat extraction has been carried out on Irish bogs for domestic use to guarantee the supply of household fuel. This activity is commonly known in Ireland as turf cutting and consists of cutting, drying and stacking peat soil, resulting in something similar to pieces of firewood which can be used for home heating.

A private individual who cuts turf on a bog is normally either the holder of property rights, and therefore owns the bog, or turbary rights, which means that he/she has the right to cut turf on a particular area of the bog. What often happens is that bogs are owned by a number of adjacent landowners, but turbary rights are more widely spread among the population. The Environmental Protection Agency’s BOGLAND report clarifies that turbary rights originated either by virtue of the resettlement of land that had previously been confiscated as part of British colonisation, or by prescription. The latter refers to the effect of the lapse of time on the acquisition of the right to cut turf for ‘a person able to demonstrate that he/she cut turf without secrecy, without permission and without force continuously for a period of 30 years’. Therefore, the rights to cut turf go back several centuries and are historic or customary in nature.

It is important to remark that turf cutting, which until the 1980s was carried out through a long and laborious process conducted by hand, has been gradually mechanised. Scholars point out that contemporary approaches to domestic turf cutting generally involve commercial mechanical contractors cutting the turf with diggers on behalf of those with turbary rights, known as turf cutters. Notwithstanding this, turf cutting is still considered a traditional practice which forms part of the country’s cultural heritage. After all, following the mechanised cutting, the process of stacking and drying the turf goes on in the traditional manner by families with the help of neighbours.

Therefore, the history of turf cutting which is anchored in the cultural tradition of the country and the property (and turbary) rights connected to it constitute a strong basis through which to examine the restrictions on peat cutting imposed as a result of EU requirements.

The main culprit of the introduction of restrictions on peat cutting is Council Directive 92/43/EEC of 21 May 1992 on the conservation of natural habitats and of wild fauna and flora, more commonly known as the Habitats Directive. The Directive aims to protect habitats of natural importance by adopting an approach based on the designation of Special Areas of Conservation (SACs), which together with the ‘special protection areas’ (SPAs) designated under the Birds Directive, constitute the pan-European ecological network of Natura 2000. Both active and degraded raised bogs are among the habitat types of community interest listed in Annex I of the Habitats Directive, which means that they must be designated as SACs in proportion to their representation within the state’s territory.

Therefore, in light of its ecological importance, a SAC site is designated by the member states by statutory, administrative or contractual act and is subject to the conservation measures necessary for the maintenance or restoration of the natural habitats and the populations of the species for which the site is designated. The Habitats Directive was transposed into Irish law in 1997 by the European Communities (Natural Habitats) Regulations. In a heritage briefing published in June 2020, the Department of Culture, Heritage and the Gaeltacht states that, between 1997 and 2002, Ireland nominated 53 raised bog sites for designation as SACs.

Once chosen, protected SAC sites need to be safeguarded from damaging activities. Thus, Article 6(3) clearly states that any development plan or project likely to have significant negative impact on the integrity of a protected site must be properly assessed through an appropriate assessment and refused if such negative impact is shown to exist. The following paragraph adds that harmful developments may still be permitted, unless they concern a priority habitat or species, if they respond to an overriding public interest, including those of a social or economic nature, and if non-pecuniary compensatory measures exist.

Turf cutting falls within those harmful activities leading to ecosystem degradation especially since its mechanisation replaced hand-cutting practices. Therefore, although the aim of the designation approach under the Habitats Directive is one of protection, designation also prohibits the traditional right to cut turf. In line with the ban on turf cutting, in 1999 the Irish Government introduced the Turf Cutting Cessation Scheme (TCCS) to reconcile, on the one hand, the government’s push for the protection of bog SACs in the face of EU obligations and, on the other hand, the demands of local populations to continue with their rights of resource extraction. The scheme aimed at encouraging turf cutters to cease domestic turf-cutting on SACs by promising them compensation of an annual payment for up to fifteen years or, where feasible, relocation to non-designated sites to continue turf cutting until exhaustion of their hopper allocation or for up to sixty-five years. After a ten-year derogation during which turf-cutting continued undisturbed, in May 2011 the government confirmed the ban on domestic turf cutting, after a letter of formal notice had been sent to Ireland by the European Commission in January 2011. However, Noteworthy revealed that turf cutting occurred on ‘over 280 plots of EU protected active raised bog sites in 2021 without any consent from State authorities’.

Where are we at ten years later?

In a recent debate in the Dáil on 26 Apr 2022, the Taoiseach stated that ‘the traditional practices in rural Ireland will continue regarding turf’. The statement is in line with new Solid Fuel Regulations entered into force on 31 October 2022. They achieve the aim of improving air quality by restricting the sale of smoky fuels; the regulations also ban the large-scale commercial sale of turf, while still allowing people to cut turf for their own use and sell it under certain conditions. No distinction is made between designated or non-designated sites, but it must be assumed that they concern the latter as such provisions on protected sites would be somewhat unusual given the illegality of the activity. However, evidence shows that turf continues to be cut on SAC sites.

At the same time, on 29 September 2022 the European Commission issued an additional reasoned opinion calling on Ireland to take action to halt the continued cutting of peat within SACs designated to conserve raised bogs and blanket bogs under the Habitats Directive. It gave the Government two months to respond and take the necessary measures. Otherwise, the Commission may decide to start proceedings against Ireland before the European Court of Justice. The Irish Times reports that Michael Fitzmaurice, chairman of the Turf Cutters and Contractors Association, said that the EU statement ‘could lead to “a return to the trenches” and stand-offs between “hundreds” of turf cutters and gardaí not seen for almost a decade’.

It is therefore evident that the controversy between turf cutting as a traditional practice and the need to protect peatlands as a natural habitat is still alive. The same questions arise again. Can peat cutting still be considered a traditional practice even if today very little is practiced in a traditional way and is instead heavily mechanised through the involvement of contractors? And if it is, should such traditional practice as an expression of the country’s cultural heritage play a role in the elaboration of ecosystem protection measures?

It seems that not much has changed since 2011 or rather something has, namely the constant growing awareness of the role played by peatlands in mitigating climate change and the urgency to act. How to balance the need to protect peatlands in the age of the climate crisis and respect the rights of those who have been interacting with this ecosystem for decades? These are the problems at the heart of my research project entitled ‘Enhancing the legal response to climate change through the protection and restoration of ecosystems: an analysis of environmental and human rights law through the case of peatlands in Ireland”.

This website uses cookies so that we can provide you with the best user experience possible. Cookie information is stored in your browser and performs functions such as recognising you when you return to our website and helping our team to understand which sections of the website you find most interesting and useful.

Strictly Necessary Cookie should be enabled at all times so that we can save your preferences for cookie settings.

If you disable this cookie, we will not be able to save your preferences. This means that every time you visit this website you will need to enable or disable cookies again.

This website uses Google Analytics to collect anonymous information such as the number of visitors to the site, and the most popular pages.

Please enable Strictly Necessary Cookies first so that we can save your preferences!